I tried to buy a new battery for my camera, but Best Buy doesn't carry batteries for ancient cameras like mine. The Best Buy employee literally gasped when I said the camera was 5 years old. I forgot that in tech years that is the same as saying 50! Thankfully, my Aunt Michelle brought her camera and snapped some pics of Levi's 1st birthday party! I chose a puppy theme for a few reasons, 1) I thought it was a cute and masculine idea, 2) I was excited to serve an easy yet very fitting main course... hot dogs! and third, I was also excited for puppy chow (aka muddy buddies), which worked great as a "Doggy Bag!" The sign says doggy bags. 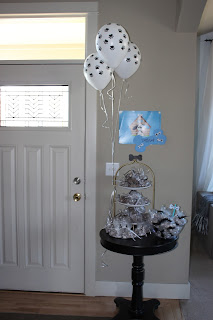 I used my Cricut to make the banner and a plethora of dog bones. Dog bone confetti, dog bone cupcake pics, dog bone this and dog bone that. We kept it simple and had Puppy Punch, Ice Water and more bottled water outside in a big cooler. It was a beautifully sunny day and we needed lots of liquid. 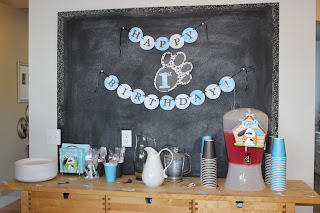 A very dark picture, but you can see one of the poms above the buffet. Georgiana suggested keeping the food inside so the bugs wouldn't get it :) 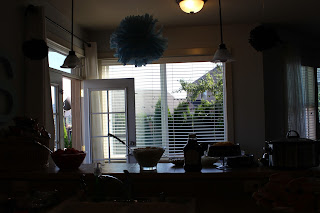 The cake table!
It's my favorite cake table that I've done, and it was so much fun to play with the theme!!
Cocoa puff "dog food", Sugar cookie dog bones, Blue jello in the water dish and little water dishes. Cupcakes with dog bone sprinkles and a little smash cake for the birthday boy! 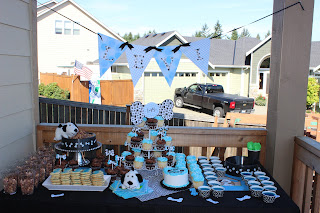 When planning a party for a one year old you start to wonder if he is even going to notice any of it? Well, my aunt happened to catch his first reaction to the cake table, he lunged for it with oohs and awww, ha ha :) It made a very tired momma SO happy! 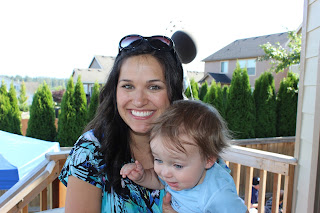 His shirt says My First Birthday with a big cupcake. I ordered it from Amazon and it came with blue boy bloomers. (What do you call boy bloomers?) 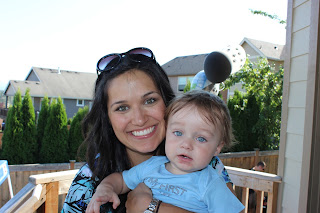 Pointing to the puppy :) 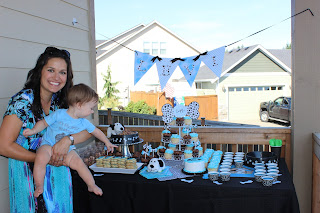 Smash Cake (Cake and cupcakes came from Albertsons, the smash cake is free with a lg cupcake order or cake order). 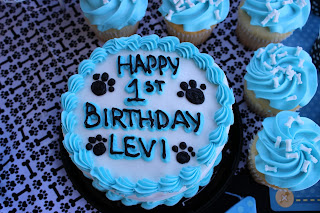 Kelly manned the bbq and enjoyed visiting.
Our neighbors generously let us borrow their tables and chairs and a big shade covering. We covered most of the tables with white butcher paper and put out crayons in puppy paw printed containers and let the kids go to town. I ordered a ton of balloons, many of which sailed away right off of the ribbon. Yep, I was left holding just ribbon. Albertsons refunded us for the balloons, cest la vie. 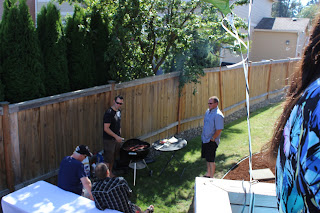 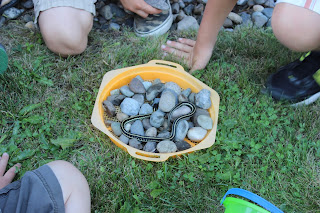 At 6:00 am the day of Levi's party, Georgiana started asking when his friends were going to come over? I think she was quite excited to play with all of Levi's friends, ha ha! 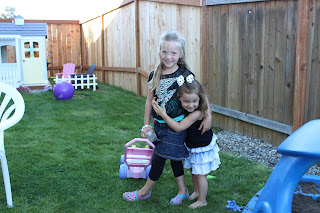 Birthday dinner!
Hot Dogs with a ton of condiments
Chili
Grandma's Macaroni Salad
Watermelon
Kale Salad (From Costco)
Little bags of chips, that I way overbought and have been grabbing out of the pantry way too often! 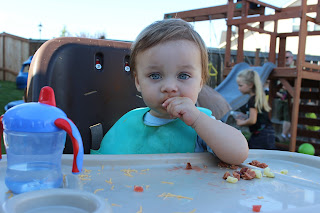 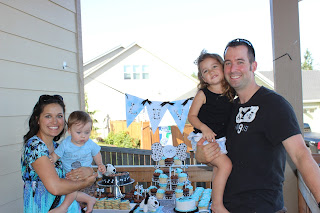 The one and only picture snapped before Levi threw his crown off his head, and refused to get back on. His face tells you how thrilled he was to have it on even briefly! 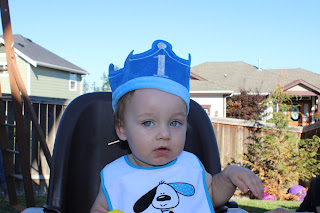 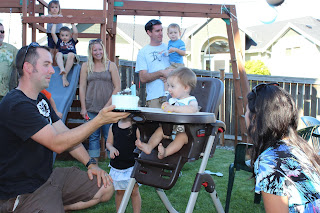 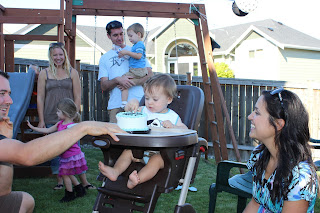 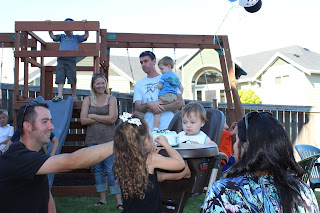 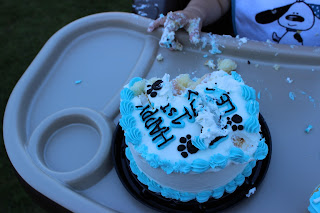 I think he was messier after eating his hot dog. He did NOT like the frosting on his hands. Which is funny, because he has been known to grab frosting right off the top of a cupcake and down it :) 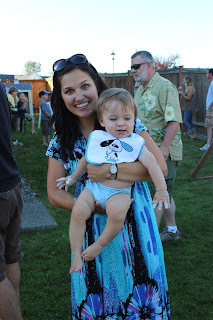 Praise the Lord for a sunny day and lots of room to play! 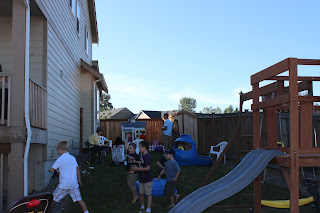 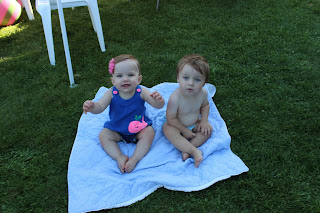 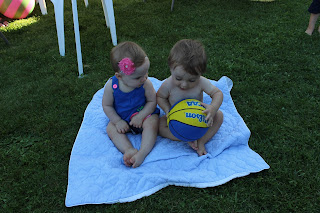 Levi showing off his muscles! 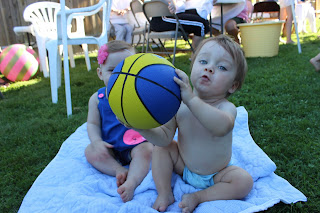 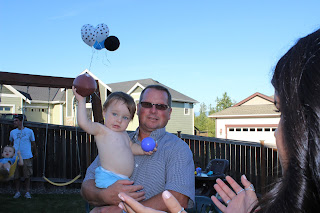 Georgiana and (I am going to be brave and say...) Mason! (Jessica, when you read this please feel free to correct me if I am wrong).
**correction, this cutie patootie is William** I have never been wrong in person, bummer, sigh, sorry boys! 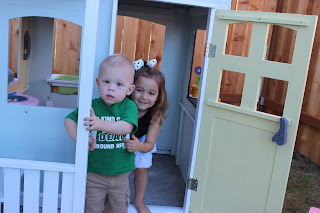 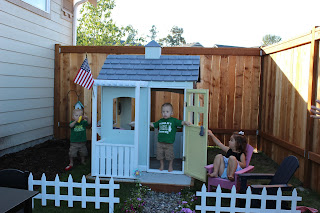 Levi climbed right on up into his chair, such a big boy! 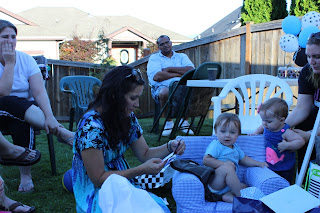 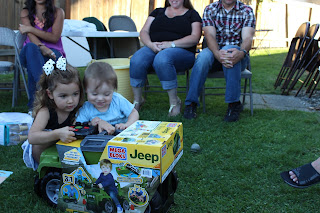 Levi is so happy just to play in the rocks and dirt. Such a little boy! 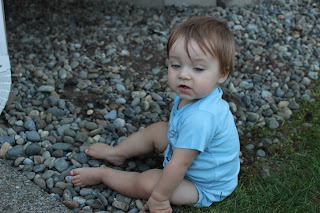 Levi, we LOVE you SOOOOO much, you make the stress of trying to throw a party with two very very very active 'helpers' completely worth it! On a side note, two things I did that made life a lot easier in the party planning/hosting aspect, I sent out an evite instead of addressing and mailing invitations, it was quick and easy and matched the party and kept track of the rsvps too. Secondly, his party was an open house and that was amazing!!! Friends of little ones didn't arrive stressed out because they were trying to make it "on time," friends who had to leave to head somewhere else did so with ease and there wasn't an overwhelming number of people all at once. Also, we did presents after the official party time, and during the party I felt so much more relaxed, Levi vs the cake was the only party event. Otherwise the food was available the whole time and the kids just played in the backyard. What a year, I am going to not get too nostalgic, otherwise I will just bawl. My baby boy is one.
Posted by Nicole at 9/16/2013

Oopsie! It's William in the pic, not Mason! ;)
But we loved the party and love Mr. Levi! 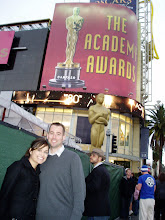